Poems and Poetic Lyrics and Verses Writen About or Related to Butterflies. 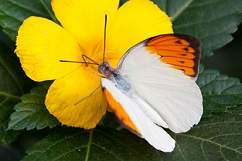 I’ve watched you now a full half-hour;
Self-poised upon that yellow flower
And, little Butterfly! Indeed
I know not if you sleep or feed
How motionless! – not frozen seas
More motionless! and then
What joy awaits you, when the breeze
Hath found you out among the trees,
And calls you forth again!


This plot of orchard-ground is ours;
My trees they are, my Sister's flowers;
Here rest your wings when they are weary;
Here lodge as in a sanctuary!
Come often to us, fear no wrong;
Sit near us on the bough!
We'll talk of sunshine and of song,
And summer days, when we were young;
Sweet childish days, that were as long
As twenty days are now.

STAY near me--do not take thy flight!
A little longer stay in sight!
Much converse do I find in thee,
Historian of my infancy!
Float near me; do not yet depart!
Dead times revive in thee:
Thou bring'st, gay creature as thou art!
A solemn image to my heart,
My father's family!

Oh! pleasant, pleasant were the days,
The time, when, in our childish plays,
My sister Emmeline and I
Together chased the butterfly!
A very hunter did I rush
Upon the prey:--with leaps and springs
I followed on from brake to bush;
But she, God love her, feared to brush
The dust from off its wings.

'To a Butterfly' is a lyric poem that William Wordsworth wrote in 1802. In the poem, he recalls how he and his sister Dorothy would chase butterflies as children when they were living together in Cockermouth, before they were separated following their mother's death in 1778 when he was barely eight years old. The 'Emmeline' of the poem is Wordsworth's sister Dorothy.